My parents met and married in California. After my Dad’s service ended he wanted to move quickly back to Oklahoma, my mother was pregnant and his first child was going to be born in Oklahoma. When my mother first saw Oklahoma she always mentioned how flat Oklahoma is and how surprised she was when she saw downtown Oklahoma from miles away. Even though I was born and have lived most of my life in Oklahoma (although there were three years in Dallas and two years in St. Louis) I have never felt bound to my home state. I can remember as far back as my sophomore / junior years in high school I was looking at other places I wanted to live. (Chicago has been looking really good in the last few years.)

Since the summer readers in Oklahoma have been waiting for Boom Town by Sam Anderson. I was one of those readers who couldn’t wait to read the book. A local realtor was so excited about the book she gave away two copies. I was lucky enough to win one of them. This book was a very mixed bag.

The book is a mix of sports writing and Oklahoma history since David Payne wanted to settle in the Unassigned Lands and brought settlers into the area. In nearly everything I read the Thunder half of the book wasn’t mentioned.

If you are wondering if there is a person in the OKC metro area who is not a Thunder fan, Hello, my name is Amy and I have never watched a Thunder game, nor do I own any Thunder merchandise. I have all Oklahoma sports news muted on my Twitter feed, actually all sports news is muted. A lot of this dislike of sports came from my time at the University of Oklahoma, where a number of the buildings looked like something out of Edgar Allen Poe (The Fall of the Hall of Gittinger) while the football stadium kept getting bigger, both in height and footprint. So reading about the Thunder and the almost play – by – play of games bored me to no end. The history though was something I wanted more.

In high school, usually your sophomore year, you take a semester of Oklahoma history. My Oklahoma history textbook was at least 15 years old and stained with chewable tobacco. The pages actually stuck together, and everything I remember about the history was about agriculture. I had never heard of Angelo Scott, a man that kept a lot of blood from being spilled, and I can’t believe there is nothing in the downtown area that has his name on it. I knew of Stanley Draper because his name is on a few items, including a lake, but I didn’t know who he was or why he was so highly thought of. I knew a little bit about the complete destruction of the East side. And as for  Roscoe Dunjee, they were people I’d never heard of him until this year. With the anniversary of the sit – ins downtown I’d begun to hear more about Clara Luper and the 13 students.  Between Boom Town and The Worst Hard Time (I read this 2 years ago) I now have this craving to read more Oklahoma history.

For anyone in Oklahoma who has not read this book, I feel that I need to warn you about the final third of the book. It handles the most devastating events in Oklahoma’s recent history, the bombing of the Murrah Building in 1995, and the EF5s that hit Moore 1999 and 2013. These events are still raw with me, and in reading about them, some details (especially with the Murrah bombing) I didn’t know and those chapters made my anxiety creep up. 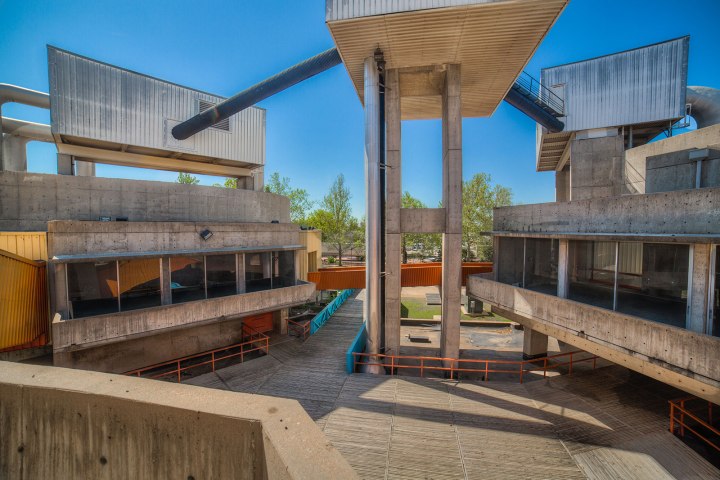 The above photo is of Stage Center, a theater complex with three theaters which was torn down in 2014. One of the disappointments in downtown OKC is the lack of historic buildings. Anderson talks about how manic the chamber of commerce was in tearing down buildings. This really hasn’t changed. Besides Stage Center we lost a couple of film buildings as our new Scissortail Park was being created. As we move ahead there are some lessons we haven’t learned, like tearing down older buildings.

If you only know about Oklahoma through the Thunder I highly recommend Boom Town for a better understanding of a microwave popcorn city, one with a birth date and and time this book is a great starting point. On Friday I will have a reading list of books, both fiction and non-fiction, about Oklahoma, the state not just the city.